Animation basics are pretty straight forward. There are a few things you need to know which lay the foundation for essentially every animation you try to approach ( BUT I’M NOT HERE TO TALK ABOUT THAT). You need a basic idea of how physics can be imitated, and should learn how to break the real-world rules to get a desired illusion of motion:

LOOK AT THIS FRAME FOR EXAMPLE: 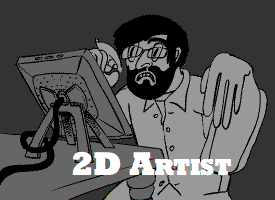 WHAT IS HAPPENING A MELTING FACE OH NO!

The weird melting face frame is used to trick the eye into seeing a faster motion. Here’s a lil’ science: Your eye can differentiate frame rates up to 150  frames per second. Which is to say your brain can process things moving VERY fast. Animating is a pretty time consuming process so rather than animating a mind-exploding 150 frames per second most animators stick to 24 frames per second. To make animations more fluid, you can try and eek out more motion from individual frames to make 24 frames per second seem faster. While you shouldn’t blur every frame, you can blend important frames together by stretching a form across an arch of motion.

Here’s what it looks like with just one blurred frame tying it together:

What you might notice about this is that it’s sudden, jerky, not entirely fluid…disgusting. DAMN YOU HUMAN EYES! DAMN YOU AND YOUR POWERS OF MOTION PERCEPTION!! The blur is such a drastic change between the first and last image that it doesn’t quite make sense to our brain. How do we solve this? Let’s add another frame in the blur to slow it down before the final image. Much like a bouncing ball (pause for effect), we must keep anticipation and follow-through in mind to make motion appear fluid. Consider the top of the raised arm the top of a bounce. So, as the arm gets closer to it’s slowest point in the arc we include more frames of the motion to stretch out the time spent in that pose. Here’s what it looks like when I add one more blurred frame before the final frame:

Just one extra frame and it looks much, much less clunky. Now that we’ve gone through all that, here’s a more complicated animation that uses a bunch of anticipation: